From a difficult phase as evident during the Saffron Revolution in 2007 to a pronounced partnership as shown in October 2018, the relationship between the Buddhist monks in Myanmar and the country’s military, known as Tatmadaw, has experienced several ups and downs. 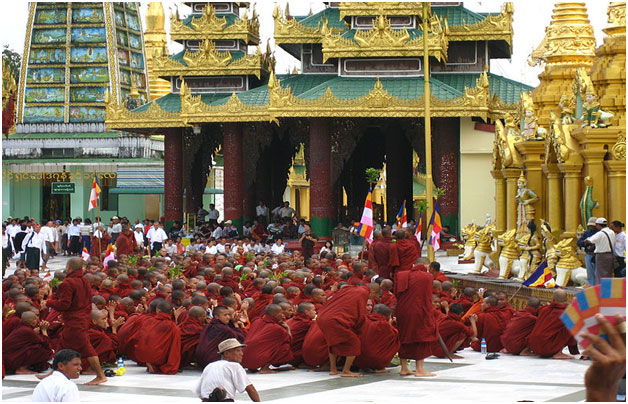 It was not too long ago when the Buddhist monks criticized the military junta and supported the democratic movement, led by Daw Aung Saan Suu Kyi, a Nobel Laureate and now the country’s de facto leader, and her National League for Democracy (NLD). The Saffron Revolution was a demonstration of strong resentment by the Buddhist monks against Tatmadaw’s rule in Myanmar. Therefore, in October 2018, the photos of Buddhist monks holding the portrait of Tatmadaw’s Commander-in-Chief, Min Aung Hlaing, to display their support for military’sactions against the Rohingyas in a rally came as a surprise to many. This compelled hundreds of minds to understand the changing dynamics of relationship between the monks and the military in Myanmar. By the end, this commentary will explain why an alliance between these two dominant groups in Myanmar cannot actually be termed as a surprise.

Ashin Wirathu, one of the radical Buddhist monks, mentioned in the same rally in October 2018 that if government or any other Myanmar authority needs to face the International Criminal Court over the allegations of human rights violations of the Rohingyas, he would not hesitate to take up a gun to respond to it. The rally was organized in solidarity with the Myanmar armed forces as they have been facing international criticism over their atrocities against the Rohingyas. This can be termed as jingoism (a strong sense of nationalism combined with Buddhist cultural superiority and military assertiveness) which has incorporated a sense of bitterness against the Rohingyas, an unofficial ethnic minority community in Myanmar. Perhaps, it would not be an exaggeration to suggest that in Myanmar, opposition against the Rohingyas work as a common thread binding the majority community (i.e. the Burmans), the military and the Buddhist monks. As the Constitution and the socio-political system of Myanmar have allowed the Myanmar military to enjoy strong influence over the parliament and governance, it is again safe to propose that the Buddhist monks, the military and the ethnic majority community (and their elected government) find it only natural to demonstrate support for each other when criticized or condemned for any of their actions against human rights violations or ethnic cleansing of the Rohingyas.

One of the early signs of this alliance between the monks and the military was shown in 2013. In March 2013, in Meiktila, located in Central Myanmar, the communal violence erupted against the Muslims. As the government and administration chose to remain silent for few hours after the initial breakout of violence, the ethnic clashes continued in several pockets in the town (and adjoining areas) causing displacement of around 12,000 Muslims. Consequently, the Union Solidarity and Development Party (USDP), which had formed the government after 2010 elections in Myanmar, could manage to get a seat from Meiktila in the general elections, conducted in 2015 even though NLD secured a sweeping victory countrywide. Arguably, USDP government’s silence on the communal violence, driven by the Buddhist mobs and its focus on peace and stability based on Burman identity helped them to get that seat in Meiktila. In a same tone, the USDP is now focusing on race, religion and national identity while preparing for the upcoming election in 2020 which might help them to secure few seats where NLD’s reach is low and stability has not been ensured ever since the democratic government has taken over in early 2016.

After Meiktila, the Myanmar military and the Buddhist monks have given their backs to each other as both the parties have indulged themselves into ethnic violence, communal riots and state-sponsored ethnic cleansing operations against the Rohingyas in Rakhine state. In fact, Ashin Wirathu and other leader monks from Ma Ba Tha (The Protection of Race and Religion) group, which is being alleged to have involvement in anti-Rohingya protest marches and hate speeches on several occasions, enjoy sponsorship from the military. In 2017, the Sangha Maha Nayaka Committee, a government appointed highest committee dealing with Buddhist religion in Myanmar, imposed few restrictions on Ma Ba Tha and Wirathu was banned from public speaking for one year. However, this did not stop them from spreading anti-Muslim hatred online. In fact, a Reuters report indicated that Wirathu visited the conflict-ridden Rakhine state in 2017 and 2018 despite the ban on his preaching. Ma Ba Tha group too, continued its anti-Muslim (especially anti-Rohingya) agenda with a new name, Buddha Dhamma Parahita Foundation.

Finally, the radical Buddhists or the hardliner Buddhists like Wirathu and his followers believe that Buddhism is under threat in the contemporary world. The rise of Islamic fundamentalism under the umbrella of outfits like al-Qaeda and IS has heightened that threat perception among the Buddhists in Myanmar. Simultaneously, the Burman Buddhist nationalism, which has always been a strong sentiment in Myanmar, has contributed to their growing sense of antipathy against the Rohingyas whom they consider as outsiders/illegal immigrants and refer as Bengalis. Thus, the pronounced partnership between the Myanmar military and the Buddhist monks seem to be an expected outcome of a domestic socio-political system where jingoism works hand in hand with religious fundamentalism.

Dr. Sampa Kundu is an Assistant Professor at the Symbiosis School of International Studies, Pune and has previously worked at the Institute for Defence Studies and Analysis, New Delhi.