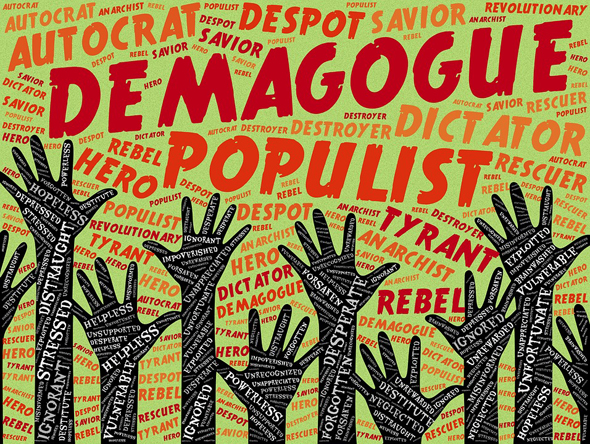 The  international milieu of the twenty-first century has witnessed a rapid and steep rise in populism throughout the world. The term populism has originated from the Latin word 'populus' meaning the 'people'. The definition of Populism varies for different people; however, its basic premise revolves around mobilization of ordinary populace to have control over the government instead of a minority elite group. In the contemporary understanding, populism has been associated with charismatic leaders coupled with sentiments of anti-elite government. It is mostly based on garnering majority support by creating a divide, often of economic or religious grounds, within the society.

Populism as an approach originated in the United States around the end of the nineteenth century with the establishment of the People's Party or Populist party in 1892. It was essentially an alliance between farmers and labour unions demanding reforms that would empower lower and middle classes. The major reforms championed by the People's Party, were the creation of granaries, better working conditions for the workers, women suffrage, progressive income tax and federal control of the railroads. From here, populism gradually spread towards the east engulfing Europe and Asia under its influence. At present, the populist movement can be witnessed with a renewed vigor across the United States, Europe and Asia.

The election of United States President Donald Trump signifies the rising occidental wave of populism. He came to power by criticizing the inefficient government and by tapping into the xenophobic, anti-immigration and anti-Islamic sentiment of the masses following the 9/11 terrorist attack. His slogan of 'Make America Great Again' by bringing back jobs to the American people appealed to the masses suffering from the slow economic growth in the past decade following the 2008 economic crisis. Radical decisions banning immigration from seven Islamic states in 2017, restrictions on H-1B visa for immigrants along with massive deportation of illegal migrants reflected the fears and sentiments of the US masses.

Similar characteristics can be observed even in the European states in the last decade with the decision of the UK to exit the European Union undermining the European unity. There had been a simmering discontent with regard to migrants and refugees in Europe that was further aggravated with the massive Syrian refugee crisis in 2016. Germany had been one of the states that welcomed and accommodated the refugees. However, following the sporadic terrorist attacks in its neighborhood, even German chancellor Angela Merkel undertook a partial ban on burqa subsequently responding to the rising xenophobia in the state. Apart from the ethnic divide, economic factors also play an important role in the spread of populist sentiments. For instance, in many European countries, anti-immigration policies have been frequently adopted by governments blaming high immigration rates for unemployment and economic stagnation. Even in the Czech Republic, which had a stable growth rate at 4.3 percent and low unemployment rate at 2.3 percent, the country saw a surge of populism led by Andrej Babis of the ANO 2011 party. Portraying himself as the 'outsider' working solely for the betterment of the indigenous people against the corrupted elite government he was able to garner support by bringing few reforms and by tapping into the anti-immigration sentiments of the masses. One major result of the populist movement in Europe has been the Brexit referendum. It is a core example of the masses going against the establishment. In the referendum, it was recorded that mostly the small town orthodox and conservative people voted to split from the EU, as they were dissatisfied with the notion of integration, against immigration and wanted to take back control and their sovereignty. Even Hungary and Poland have shown signs of radical rise of populism in recent years.

Along with this, the populist wave has also hit Asia, particularly the Southeast Asian states. However, populism in the east or oriental populism has distinct characteristics as compared to European and American wave. Here, instead of basing their arguments against the rising immigration and economic institutions, oriental populism thrives on religious and ethnic division of the masses. Along with this, another major difference lies with regard to the political structure and systems in the orient as against the occident. The democratic system is deep-rooted in the occidental states and thus is able to sustain even with the anti-establishment sentiments. However, the oriental states due to absence or weakness of the democratic system turn out to be more repressive in nature with populist leaders coming into power thereby having a higher chance to threaten democracy in these states. Populist leaders in these states undermine the checks on power and use extensive violence, attack media and prosecute political opponents.

In the Philippines weak democratic institutions, ineffective state mechanisms and their inability to bring about equality and reform has left the masses frustrated. Making it easier for the current Philippine populist President Rodrigo Duterte to come to power posing himself as a man of the people and against the ruling elites. Thailand, following the 2008 economic crisis, experienced disenchantment from the ruling elite and thus paved way for populist leader and former Prime Minister Thaksin Shinawatra who weakened rule of law, repressed judiciary and initiated a violent war on drugs killing thousands of people. Thaksin was overthrown by military coup in 2014 which turned out to be even more repressive and autocratic thereby destroying the democratic milieu of the state. Indonesia has a healthier democracy as compared to the other states in the region. The present governor of Jakarta Joko Widodo elected in 2014 defeated former Lieutenant Prawabo Subianto who had partnered with conservationist Islamists in the state and had been using ethnic and religious differences portraying the Indonesian Chinese as the 'other' blaming them for inequality and corruption.

Therefore, from the above arguments it is clear that democracy and populism share a tense relationship. Like democracy, populism seeks to realize the interests of the masses, however, it has acquired a very radical and intolerant form amplifying inter and intra-state conflicts worldwide and has been undermining the values of liberal democracies in various states.