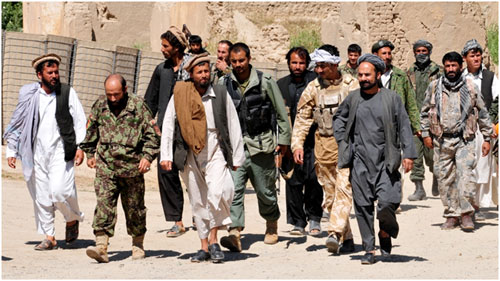 To Beor Not to Be: That is the Question - Sharon John

Earlier this year, former Afghanistan President Hamid Karzai in conversation with The Hindu's Diplomatic Editor, SuhasiniHaider, had expounded upon his thoughts on the future of Afghanistan politics. Chief among them was his urge for India to treat the Taliban as an active and relevant dialogue partner in Afghanistan.He viewed Taliban to be an important stakeholder in the future of his country and believed that India was better poised to deal with them as opposed to either the US or Pakistan who have long been active players on Afghani soil.

In the past,India has remained sceptical over talks with the Taliban since it considered the group to be engaging in violent extremistactivities targeting India that were ably supported by Pakistan. The prologue of the2017 book, 'Defeat is an Orphan: How Pakistan lost the Great South Asian War' by Myra MacDonald, clearly details this bonhomie through the narrative of flight IC-814's hijack. At that time, the Indian negotiating team led by VivekKatju, AjitDoval and CD Sahay were out of their depth in dealing with the Taliban and had to releaseAzhar, Omar Sheikh and Mughtaq Ahmed Zargar. This blot remained in the Indian psyche and made bitter any sort of future approacheswith the Taliban.Consequently, although India's stance has always been to support the legitimate government in Afghanistan, it has mostly expressed friendship with the Northern Alliance. This has been mainly due to India viewing Afghani politics through the lens of Pakistani foul play. In the21st century with the ousting of the Taliban government, the Indian Army became involved in training and providing weapons to the Afghan National Army for their fight against Taliban insurgency. Increasing US intervention and rising conflict in the region further led India to support humanitarian aid and reconstruction activities in Afghanistan to the tune of USD 3 billion. Indian involvement in this effort furtherincreased after the signing of the Strategic Partnership Agreement (SPA) in 2011. Capacity building and development in key areas such as security, infrastructure, human resource, communications etc. became focus sectors on the Indian agenda for the reconstruction and reintegrationof the country.

For India, Afghanistan is a crucial link enabling India's ambitious foray into the Central Asian plains, partnership with Iran on the Chabahar port and plugging off cross-border terrorism. However, with actors such as China and Russia evincing interest in the country, India must strive to maintain and enhance its relevance towards the war-ravaged country. Curtailing Pakistan's influence in Afghanistan remains crucial in achieving these interests. A Taliban overrun Afghanistan in cohorts with Pakistani terror outfits will make India a primary target for terror attacks and create renewed tensions in its borders. Reportedly, the perpetrator of the Pulwama attack was inspired by Taliban's module of jihad. This goes on to indicate the possibility that the Taliban may become the ideological inspiration of renewed insurgency in Kashmir.

Only a strong and independent Afghanistan can thwart Pakistan's schemes of wounding India. Within the South Asian security landscape, India needs to prove its capability in managing security andcreating prosperity among the regional states. India needs to instil confidence in the global community at large that it is an effective and better alternative than Pakistan to handle and manage Afghanistan's transition to a peaceful nation.Speaking at the Jaipur Literature Festival in January, former NSA Shiv Shankar Menon spoke about India needing to have a clear-cut role and strategy in Afghanistan that also would involve supporting the Taliban to turn back on violent extremism and giving them mainstream recognition. India must cash in on its valuable soft power, and the deep cultural foundations it has with Afghanistan. At a pragmatic level, India should not overlook the fact that currently Taliban has more than 60,000 armed followers and controls almost 40 percent of the country's territory. Hence, they are now an integral part of the Afghani social fabric and India should hone this aspect to its benefit.

Afghanistan seeks sovereignty, stability and friendly relations with its neighbours and other regional players. Being manoeuvred into being a puppet for other countries to play out their policies is no longer acceptable to its inhabitants.Peace and sovereignty remain the key issues. Towards this goal while continuous peace talk efforts led by US and Afghanistan in the past have died out, the Moscow Format held on September 2018 has heralded the coming out of Russia as a major stakeholder willing to mediate and hold talks between the Taliban and other concerned states. Shunning any possible cooperation with the Afghan government, the Taliban rather seeks to represent Afghanistan and engage in direct talks with the other parties. The US on its part has been separately holding talks with the Taliban in Qatar to negotiate and come up with better terms of engagement.However, in light of its 50% troop reduction from the conflict-stricken country,India will need to recalibrate its choices.ZalmayKhalilzad, the US representative for Afghanistan peace talks, on his visit to India had openly solicited Indian support in managing the Afghan dilemma. Although sustaining its investments in Afghanistan proactively will leave a dent in the Indian budget,India today is capable of being proactive in order to shape regional developments.

While India's erstwhile confrontation with the Taliban at Kandahar was a forced and humiliating event, India's participation at the Moscow Format signifies an international acknowledgement and anticipation of the role India can play in Afghanistan. At the conference, two former diplomats represented India in a "non-official" capacity. India can ensure a stable and friendly presence in the counter-terrorism and other reconstruction activities taking place in Afghanistan. According to Rakesh Sood, a former ambassador to Afghanistan, 'the fact that India was invited is a reflection of the investments that India has made in soft power across the board.' For the peace process to succeed, all stakeholders including the Taliban must be given equal relevance. The process should, however, be Afghan-led and Afghan-owned.It would help Afghanistan and its neighbouring countries in improving their economies and enhancing greater land integration. It would even allow the Central Asian states to fight back on their home-grown radicalization and boost counter terrorism activities.

Currently a fine balanced approach for Indiawould be to move forward with its diplomatic efforts and developmental support processes in Afghanistan. Giving equal importance to both initiatives will ensure and sustain India's goodwill regardless of which Afghani power leads the peace process. As new realignments emerge in Afghanistan, India will have to collaborate with the other state actors to become a key player in the smoothening out of Afghanistan's political upheaval.However, in the past India had adopted a hard line stance with regard to the Taliban, this position has now softened and become more pragmatic. India's partnership with Afghanistan needs to be based on fluidity, flexibility and vision. Looking towards the future, India needs to acknowledge the fact that the Taliban is here to stay and should look for ways to effect its soft power advantage. To be or not to be is not the question. The question is whether 'tis nobler to allow other stakeholders to take the lead in engaging with the Taliban or to take arms against a sea of challenges and lead the way on a much more active basis.