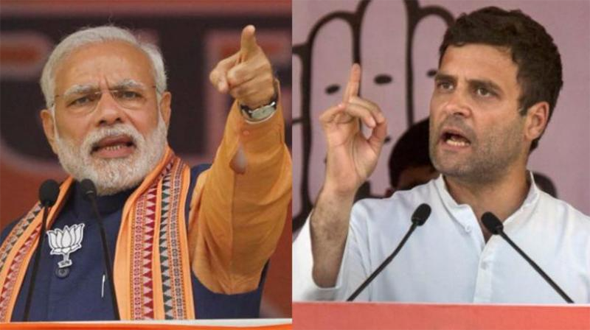 A tidal wave known as populism has hit the political orders across the world, from Northern America to Europe, Latin America, and Africa and across the Asia. Although we are living in this apparent "era of populism", it is very difficult to define it as a political concept. The Oxford Dictionary defines populism as "a political approach that strives to appeal to ordinary people who feel that their concerns are disregarded by the established elite groups". While there is no denying the fact that right-wing populists are in power in different parts of the world, with the U.S President Donald Trump and Russian President Vladimir Putin being the most prominent ones; others include Israel's Prime Minister Benjamin Netanyahu who is in power since 2009, Rodrigo Duterte who was elected as President of Philippines in 2016, Recep Tayyip Erdogan who holds a central position in politics of Turkey since 2003 (earlier as Prime Minister and now as the President). Whereas, the 16th general elections in India marked a remarkable victory for Bharatiya Janata Party (BJP) and its allies within the National Democratic Alliance (NDA), Mr. Narendra Modi who was the face of the BJP, campaigned as the right-wing populist to win the general elections of 2014.

Prime Minister Narendra Modi successfully managed to portray himself as an "outsider" or a "commoner" who is challenging the long-entrenched political hierarchy in Indian politics. He used populism to attract new and younger voters to the polls and continued rallying against the Indian National Congress (INC) and its allies within the United Progressive Alliance (UPA). He wore his humble background on his sleeve, and presented the choice between him and Congress President Rahul Gandhi as a battle between a 'chaiwallah' (tea seller) and a 'shehzada' (prince). He also presented himself as an ascetic whose life is dedicated to the service of his people and the nation. Modi successfully denounced Congress system and depicted it as an elitist and unaware of the problems faced by the Indian masses. He ensured the victory by promising to change things for people and fighting a battle against rampant corruption and hierarchical politics in India. This populist appeal brought new voters to the polls, a large percentage of which were young, first-time voters and the middle class. Another notable aspect of Modi's election campaign was the emphasis on 'vikas' or development or the politics of hope, where he presented himself as the as the "guardian" of the economically and socially deprived sections of the Indian society.

Communication is possibly the best weapon for the populists. Populist leaders choose to relate directly to the people, Modi employed the use of social media and holograms effectively which contributed greatly to his ubiquity. This proved to be extremely beneficial as it was free from any filtrations or manipulations by the party or even the mainstream media. Additionally, its wider outreach contributed tremendously in influencing the youth and promoting the "NAMO" brand across the country.

Even after four years Mr. Modi's popularity is reasonably stable but his populist appeal has been diminished. He has transformed from a combative politician with a humble background who led a rebellion against the elites in New Delhi into a powerful head of government leading a full majority government. Presently, he is himself a part of the very elite group that he railed against, also his authoritarian populist projects have not been that effective in resolving India's structural economic problems, unemployment, poor performance of agriculture sector, rising oil prices, high inflations and coalitions by the opposition have undermined his efforts, the BJP's electoral victories in the state and district elections remains very fragile. One classic example is state elections of Karnataka in May 2018, where the Modi government won the maximum seats but lost power to a coalition by the opposition.

Moreover, social issues including attacks against Muslims and lower caste Hindus have proliferated under the current government, there have been an increase in cases of violence against women including rapes and murders and inconsiderate reactions by senior party members have caused many problems for Modi's image as the "people leader".

With very less time remaining for the upcoming Lok Sabha election, the Modi government more likely won't succeed with the same populist strategy that brought him to power in 2014. He is not an outsider nor he is an anti-establishment anymore, therefore, the only approach left for him is the revival of 'brand Modi' and portraying himself as a 'challenger' to the existing system and working for its betterment by becoming part of it. Another important thing for him is to undertake some quick disruptive policy measures to motivate and energize the voters to turn out to vote in large numbers. If he fails to gather a large number of voters to the polls as he did in 2014, the road back to power in 2019 will be difficult to achieve.

Electoral outcomes are notoriously difficult to predict in India's highly fragmented democracy. Hence, if Modi fails to revive his populist image and agenda, his ability to gather voters to the polls will be severely affected as many of the voters who were moved by this self-same populist appeal four years ago might choose to stay at home and not turn up in upcoming 17th Lok Sabha elections of 2019.