Divided Why We're living in an age of walls 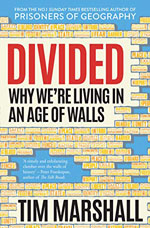 We always hear that populism is the future, our political narratives are going to be defined by populism. Populism is on the rise, whether it is left-wing or right-wing. However, populism is not just created out of thin air. It is harboured, structured and shaped by different elements of the society and is ultimately used for political means. The main crux of populism relies on creating a divide, it is pitting the masses against the elite and gaining political brownie points in doing so. This, unfortunately, has become the new world order. Donal Trump, Viktor Orban, Recep Tayip Erdoğan, Narendra Modi and Jair Bolsonaro are all creations that this new world order has churned out. In such political situations, it is natural for regions, states, continents and people to get divided.

Tim Marshall’s ‘Divided’ has an interesting subheading ‘Why we’re living in an age of walls’. This is what the premise of the entire book is. Marshall gives us a global understanding of how people are divided between culture, state, ethnicity, religion, region and whatnot. He talks about the US, China, Israel and Palestine, West Asia, Indian subcontinent, Africa, Europe and ends with the UK. In all the essays Marshall gives a personal experience of the ground reality he has witnessed as a life-long journalist.

A 40-year long career in journalism has had Marshall explore the Balkan war, Afghanistan, Arab Spring, Europe, 3 US Presidential elections, Asia and most of the West Asian region. He has seen the world change from ground zero and ‘Divided’ is a compilation of that change. His on ground reports are complemented by basic analysis and knowledge that he has gained as a journalist.

Since the book is divided into various chapters highlighting different regions, it is not possible to review all the regions as a homogenous group. This book review attempts to look at each chapter separately so as to provide the reader with a better understanding of the book.

The book starts with China’s history behind the Great Wall and how it was a historical divide that still exists today. Marshall talks about buffer States being created between China and India to maintain a balance between these two big empires. The chapter delves deep into the understanding of how Communist China kept the people poor (because of collective farming) and how it eventually led to massive income inequalities. Marshall gives a great analysis as to why migrant regulation is necessary and how the situation would be worse without it. He gives the readers a glimpse of China’s identity and how the communist party is looking forward to controlling its people by various means. He says that China’s divide is within itself and the world.

The chapter on the US is short but interesting. Donald Trump has been promising to build a wall since he started his election campaign. The book mentions horrifying details of how badly the people and politicians want that wall to be built. The chapter again dives into history to explain where all this hate is coming from. The author goes on to mention that the biggest problem the US is facing is xenophobia. This chapter is divided into 3 parts: the first part talks about the historical reason behind the divide, the second part focuses on racial discrimination and the third part revolves around the division between the Republicans and Democrats. Marshall states that the US was once a country of immigrants where people live the American dream, today the idea of this dream is being challenged.

Marshall’s chapters on Israel, Palestine and West Asia fall short on many accounts. The chapter is a pleasure to go through but it doesn’t provide a complete picture of the violence that has erupted in that region. There is an attempt to focus on the internal divide of the region and explain the history in a brief manner. A reader who is not well-versed with the region may not get the full picture of the conflict but will be able to understand where the author is going with this.

Similar can be said about Marshall’s description of West Asia. He has given the readers a great chapter highlighting nuances of sporadic conflicts within West Asia. Marshall focuses mostly on the Arab countries and talks about a pan-Arab identity. His focus on history and current political scenarios is limited to Saudi Arabia and Iraq. Subjects like Iran and the Kurdish conflict get a passing reference with no attention paid towards them.

The essay on the Indian subcontinent is one of the best in the book. Most of the chapter talks about India and its borders with Bangladesh and Pakistan. Marshall once again takes us back to history to explain the root cause of divide and why India wants its border fenced in these regions. The chapter further talks about the issue of Kashmir, Pakistan’s relationship with Afghanistan and India’s internal insurgencies in the country’s North-east region. Overall, it is a brilliant piece that focuses on the differences that are nurturing and growing within the subcontinent. The examples provided are splendid and well researched. The author also focuses on the nefarious caste system within India and how this system has allowed regressive practises like untouchability and birth-based discrimination.

Marshall dabbles into post-colonial phase when it comes to Africa. Conflicts in Africa are mainly caused because of the manner the colonisers left. Marshall says that even after most countries gained independence they continue to be ruled like colonies. Marshall blames the colonisers for destroying the existing infrastructure at that time and bringing their own practise. This has disturbed the natural ethos of many regions. This is one of the main reasons why there are so many separatist movements in almost all African countries. The chapter highlights the differences between Morocco and Western Sahara, the tussle between Nigeria-Zimbabwe-Botswana and the growing popularity of gated communities within the African continent.

The chapter on Africa is too short (about 25 pages) for a continent that has 1.21 billion population and 54 countries. Although, it is not possible to highlight issues of all African countries but giving such limited content to an area that is so rich with diversity and conflict does not appear to be justified. Marshall may want to highlight Africa as an area of conflict but by giving such limited space it feels as though he has written the essay just for the sake of representation.

The European chapter starts with the mention of the Berlin Wall. Marshall talks about the reasoning behind the wall and how division still exists 30 years after its fall. The second part of the chapter focuses on the post-Cold War scenario and the struggle of Eastern European countries to associate themselves with the European identity. Marshall also talks about the formation of a Nordic Union, Visegrad group and the issues Brexit has created.

This is one of the richest chapters of the book as it mentions a wide range of issues like migrant crisis, the annexation of Crimea, islamophobia, the emergence of a strong right-wing political movement and attack on shelter homes in Germany. This chapter (again) dives into history to explain the reasons behind the cause of division and how people overcame this division with time. It also explains the present situation about how people are getting divided again, in the name of migrants and Islam. It creates a very gloomy picture of the EU in the future.

The last essay is on the UK, it starts out with the region’s history going as far back as 320 CE with the Roman empire building walls to keep the barbarians away. The subject then quickly moves on to Brexit where Marshall tries to explain how the divides of the past are manifested in the present and will stay in the future. He blames Brexit on class war and quick migration within the country along with the fear of the EU as a supranational body imposing its will on the sovereign land of the United Kingdom. Marshall gives us a picture of the UK through his own lenses and naturally this chapter centers on Brexit.

The book is highly recommended to anyone who wants to know about the current political and cultural atmosphere of the world. The author uses historical analysis to explain the various kinds of divisions that are being created and why people are moving away from one another. One may call the book pessimistic as it shows the world in a negative light, however, it is a realist book as walls have become a reality around us. One has to just look at one's own space to realise this. Our residential place and our work space have regulations when it comes to movement of people. These are just physical barriers that exist around us, they are easy to spot. The book puts a greater emphasis on religious, cultural and ethnic walls around the world.

At one point the author does mentions that walls have become necessary because society has evolved and a community feels more secure and protected when they know that their culture, language, religion and ethnicity is protected.