The Indian Democracy and its Treatment of Islamic Minority 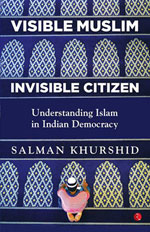 In Visible Muslim Invisible Citizen, Salman Khurshid addresses the identity of India’s largest minority and its relationship with the Indian democracy. The book is filled with Khurshid’s ideas, his opinions and thought-provoking anecdotes from his time in the Indian public sphere. Throughout the book, Khurshid gives a compelling argument of how Muslim Identity is under threat and is disappearing from the public sector. He has emphasized several times how the state of affairs in India and the growing disdain for Islam and Muslims is severely troubling.
Khurshid painstakingly tries to explain to non-Muslims this often-misunderstood faith. He rolls out an incredibly impressive list of Muslims that have contributed significantly to the Indian Nation. From revolutionaries and freedom fighters to presidents, chief ministers, army personnel, entrepreneurs, actors, sportspersons, Muslim men and women have added much value to this state that is now overlooking all their contributions.

His chapter Of Riots and the Anatomy of Conflict is brilliantly written and focuses on the several communal clashes that have occurred over the past few decades. While the comparison between the Sikh riots and the Muslim riots isn’t really fair, and  it may come off as Khurshid trying to portray the sufferings of the Muslim community to be greater, the fact still remains that these riots; especially the Mumbai riots and the Gujrat riots of 2002 have caused immense pain to the Islamic community. He goes into the painful details of the Hashimpura Massacre and the Mumbai riots and also explains how the Jalandhar riots in 1947 almost cost Dr Zakir Husain; the future president of India, his life.

Another striking tale from the book was when Mr. Khurshid (through translations of Dr Zakir Husain’s letters by CM Nain) described the Silver Jubilee celebrations of the Jamia in November 1946. With Jawaharlal Nehru and Maulana Azad on one side and M.A. Jinnah and Liaquat Ali Khan on the other – the four sitting on the same stage for perhaps the only time.  He went on to emphasize how cooperation and understanding are extremely crucial for any progress and development.

India has a harrowing history of communal violence and with the BJP coming to power, violence against Muslims has increased, statistically speaking. This book focuses on Muslims living in India, but it reflects the targeting of different identities around the world. Encouraging people to speak up against this growing injustice, Khurshid has added the poem “First they came…” by German Lutheran pastor Martin Niemoller which very well sums up the intended theme of the book.