A Review Of The Big Nine; How The Tech Titans & Their Thinking Machines Could Warp Humanity (2019) - Amy Webb 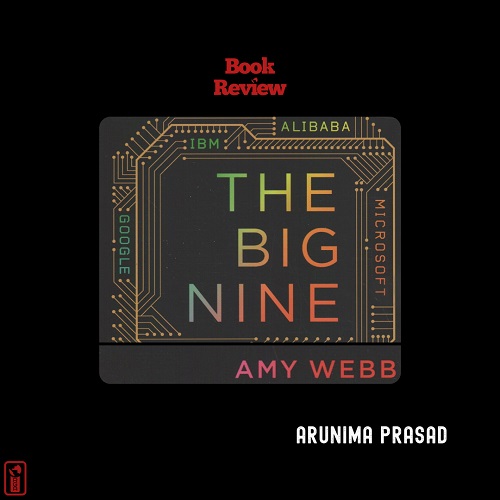 “(1) A robot must not injure a human being or, through inaction, allow a human being to come to harm” – Runaround (1942), Isaac Asimov

More than a decade ago, I didn’t really understand the logic when Will Smith was diving into VIKI’s (Virtual Interactive Kinetic Intelligence) core to inject nanites in the movie ‘I, Robot’. I speculated that it was a duel between good and evil that humanity was battling against the autonomous robots. But how do we make a choice between right and wrong? How do we decipher the warnings before it's too late?

Amy Webb is an American futurist, professor and founder of the Future Today Institute (FTI). Founded in 2006, FTI is a global network of futurists, data scientists, and designers for tackling the probable uncertainties and flaws in any organizational structure. It is a data driven-platform that researches and provides advice for future value trends that can disrupt the economy, society, and government. Beginning her career as a journalist and a reporter for the Wall Street Journal, she covered economics and technology. Her works such as the ‘Signals are Talking: Why Today's Fringe Is Tomorrow’s Mainstream’ revolve around the impact of technology on daily lives. Her latest book, ‘The Big Nine; How the Tech Titans and Their Thinking Machines Could Warp Humanity’ has attempted to recreate a politicized future and a contemporary analogy for the humanoids of Isaac Asimov. It offers a thorough analysis of the evolution and future of Artificial Intelligence (AI), one of the profound creations of humankind that has the capacity to bring the world down to ashes. It is being left in the hands of the nine big companies: Google, Amazon, Apple, Microsoft, IBM and Facebook (G-MAFIA) from the United States of America on the one hand and Baidu, Alibaba, Tencent (BAT) from China on the other.

The book is mainly divided into three sections.

The first and longest quarter (around 135 pages) provides a detailed history of artificial intelligence which stretches back to hundreds of years. The contributions of several mechanics, psychologists and political thinkers such as Thomas Hobbes, Rene Descartes, etc… were remarkable during the 15th and 16th centuries for creating the fundamental networks of AI. Even though the term ‘robot’ didn’t exist yet, they invented automatons- a mechanical representation of a living thing. It wasn’t until 1955, that scientists began to wonder about the correlation between human cognition and the technological algorithms that have the capacity to mimic our responsive attributes. The term artificial intelligence was first coined at a conference in Dartmouth College, New Hampshire. The author has also mentioned a series of universities, researchers and their experiments which have shaped AI over the course of time.

Once the major industries fell for the charms of AI, it was no longer a technological advancement. With the ambiguous strategy of the United States of America and China's grand ambition to be the hegemon of technologies, AI has turned into an instrument of both hard power and soft power amidst the political turmoil. But the path chosen by these two superpowers to upgrade their technologies is indeed contradicting regardless of their similar geopolitical interests. Whilst the US is progressing with a much safer and user-friendly package concerning only about the shareholders (the G-MAFIA and its network of various industries), China has a long-term plan laid out to fulfill its hidden political agendas. AI is a space race of China which is positioned to triumph over the commercial success of the US. The lack of visions and a solid strategy of the G-MAFIA offers an edge for the BAT to rebuild and expand the economic and military powers of China.

Despite all the perks of deep learning neural networks, the fear of the awakening of a ‘killer robot’ still lingers amongst the crowd. However, no machine can destroy humanity overnight, they can only ‘nudge’ us towards the illusion of the ‘best choice’. It's like getting a tiny paper cut. A paper cut is annoying, but we won’t die even if we get a lot of them. It can afflict pain and limit our movements. These are exactly the unintended consequences of AI; A thousand paper cuts.

The second quarter of the book (around 100 pages) appears to be the crucial section where the author being a futurist has put forward three possible scenarios, the optimistic, pragmatic and catastrophic, which are likely to exist in the next fifty years (up to 2069). It follows the circuit of Artificial Narrow Intelligence (ANI) to Artificial General Intelligence (AGI) and later to Artificial Superintelligence (ASI). The AI systems are constantly giving out warning signs. But we choose to ignore them according to our conveniences. This is where we fail, we mistreat AI as a general digital platform without any possibility of evolution instead of a ‘public good’. With Alexa, Siri, WeChat etc… on the line, the guiding principles of the systems are being manipulated for spreading nationalism.

The first and idealistic scenario depicts how life has become much easier and less scary. The population is ‘comfortably nudged’ towards a healthy and longer life. The G-MAFIA along with an international collaboration has been leading and preserving the advancements of AI, ensuring a stronger democratic system with guardians to control the extensive proliferation of ASI and the struggle for power. In the second scenario, the big nines are compelled to program speed over safety. The world is left with no choice but to live according to China’s policies where the nudging has been replaced by ‘nagging’. The broader colonization by China and the unscrupulous use of AI such as reward hacking, information contamination, and AI crimes have induced the demise of Facebook and the merger of Apple and Amazon (Applezon). The US has turned into China's ‘digitally occupied state’ amidst the growing powers of BAT. In the third and most disastrous scenario, the ignored signals have taken charge of making choices. A competition among AGIs has begun as the international collaboration collapses. America is living under AI totalitarianism and the G-MAFIA has diminished to GAA: Google, Amazon, and Apple. Nanobots are determining births and deaths. Suddenly the whole world is being crushed under a mysterious illness, a digital annihilation, where the barbarous Réngōng Zhìnéng (AI) Dynasty of China is rising.

The author concludes with a third and final quarter (around 25 pages) of solving problems. She believes that a destiny that is somewhat close to the optimistic scenario is possible with a centralized strategy and defined principles for the AI’s tribes. She has put forward the idea of an effective collaboration of governments, Global Alliance on Intelligence Augmentation (GAIA), consisting of Researchers, economists, futurists and political scientists from all the member countries. The author also proposes a set of regulations for an era of AI where humanity and values play key roles along with bolstering the global economy. The Big Nine should adopt a ‘differential technological progress’ method to minimize risk and a probable ‘intelligence explosion’ caused by ASI. The educational systems where AI tribes are born, should encourage and provide more room for hybrid degrees. Moreover, each one of us must transform ourselves. Pause for a brief second to go through the terms of service agreements that pop up on your screen every day, learn not to give up the control of our existence.

For anyone who has a keen interest in Futurology and Artificial Intelligence, this book is a must-read. The narrative begins in a rather dry manner but gradually transcends into a smooth one, inculcating curiosity among the readers. The author has used simple language with adequate explanations for all the technical terms. The second and third parts are much more crucial than the first one, thus, it demands a little bit more emphasis. Even though China is in an eternal race for power, the prospect of the US sustaining to be the hegemon with its major share in the Big Nine could not be neglected. If that is what the future has in store, it could be the worst scenario. The catastrophe G-MAFIA can bring to the world is something the author missed to point out. America has equal or even more capability than China to build a westernized version of the Réngōng Zhìnéng dynasty. The author has been successful in delivering a detailed description of the world of AI, its unintended consequences and plausible solutions to tackle the complexities.

However, the book plants numerous questions in the psyche of the readers including the most inevitable one, ‘can machines really think?’